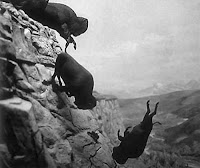 Whose voice are you listening to these days?

In studying the book Christless Christianity, I've been struck repeatedly by the increasingly pervasive trend in the evangelical world towards denying both the certainty of truth and its practical application in evangelical theology. A clear demonstration of the sad decline in biblical theology (where it was once rightly assumed) was reported from the National Pastors Conference in San Diego last month. It is incredible to me that many seem very comfortable leaving issues like the authority of Scripture, the nature of the atonement, the centrality of the person and work of Christ himself up for debate! Evangelicalism IS being "hijacked by closet theological liberals!"

It would be sad enough if the problem was just conferences and books... but the real problem lies inside local churches. The trends in many churches (including the purpose driven churches, seeker sensitive churches, the planter-driven churches and, sadly, even in established evangelical churches) is towards softening their doctrinal distinctives or ditching them altogether. The sad - but observable fact - is that increasingly churches who used to organize around what they believed and taught organize now around what they do.

This was the liberal experiment in the early 20th century, and I don't think it will be any more successful for the evangelicals of the 21st century who embrace the same strategy. IMHO, the evangelical movement is trading influence - which is found in fulfilling its mission to be a truth-teller and to feed the people of God - for the appearance of significance through programs and activity. What ever happened to "being transformed by the renewing of our minds"?

The Dallas-Fort Worth Star Telegram had an interesting article last Saturday about a book which seeks to answer the question "Why IS the church losing its influence in modern society?". The author of The Vanishing Church: Searching For Significance in the 21st Century makes this interesting and important observation:

"What I’m saying is that the biblical New Testament church is vanishing from society today," he said. "Anything and everything is acceptable as long as it builds a crowd. Jesus wasn’t as interested in building a crowd as he was in telling the truth."

Here's an important reminder as well from John MacArthur:

Hmmm. Maybe they're on to something. Make sure you're following someone who isn't leading you over a cliff...

Posted by Doulos Christou at 8:58 AM

Email ThisBlogThis!Share to TwitterShare to FacebookShare to Pinterest
Labels: I'm Shaking My Head..., State of the Church, Theology