Heresy from America's "Most Popular Preacher" 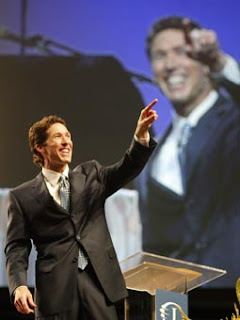 If you caught Fox News Sunday today, you got this piece of wisdom from Chris Wallace's guest, Joel Olsteen:

WALLACE: And what about Mitt Romney? And I've got to ask you the question, because it is a question whether it should be or not in this campaign, is a Mormon a true Christian?

OSTEEN: Well, in my mind they are. Mitt Romney has said that he believes in Christ as his savior, and that's what I believe, so, you know, I'm not the one to judge the little details of it. So I believe they are.

And so, you know, Mitt Romney seems like a man of character and integrity to me, and I don't think he would — anything would stop me from voting for him if that's what I felt like.

WALLACE: So, for instance, when people start talking about Joseph Smith, the founder of the church, and the golden tablets in upstate New York, and God assumes the shape of a man, do you not get hung up in those theological issues?

OSTEEN: I probably don't get hung up in them because I haven't really studied them or thought about them. And you know, I just try to let God be the judge of that. I mean, I don't know.

I certainly can't say that I agree with everything that I've heard about it, but from what I've heard from Mitt, when he says that Christ is his savior, to me that's a common bond.

Now THAT's discernment for you. He had lots more GREAT stuff to say, including an explanation of his humanistic, power-of-positive-thinking mumbo-jumbo and a laughable answer to the question of why he doesn't "...go deeply in [his] sermons into scripture." And millions are flocking to listen. It breaks my heart.

Lots of other websites point out this stuff, and I usually stay out of the fray. When I listen to this guy, Galatians 1:8-9 or maybe the book of Jude usually come to mind. But just in case you're listening, Joel, here's my reaction:


I think I speak for all of us when I say: For The Love Of Everything That's Holy, PLEASE SHUT UP!
Posted by Doulos Christou at 6:53 PM

Email ThisBlogThis!Share to TwitterShare to FacebookShare to Pinterest
Labels: Current Culture, I'm Shaking My Head..., State of the Church