On this Christmas Eve, I thought I'd share this story, which first gripped me in 1972: 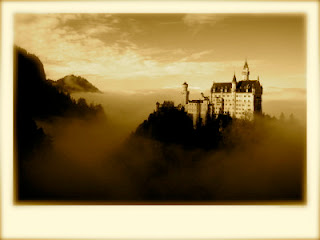 "Once there lived a king who had power over all nations and people. His courts were of richest-splendor; his tables were heavy with finest food. Music and laughter and gaiety floated from his castle. Peasants - in their valley of violence and hunger - stopped and looked at the castle for a long while, wishing they might know the king. But none were able to reach it.

In the cold of winter, the king's tailor entered the royal chambers with the latest additions to the king's wardrobe. He had selected the finest materials and woven them into the most beautiful garments that eyes had ever seen.

But the king was not pleased. He ordered his tailor out, vowing to make his own clothes. The door to the throne room was shut and locked. Weeks passed. The royal court waited with anticipation to see what the king would make for himself. They knew they were bound to be blinded by the glory of it. Finally the awaited day arrived. The door opened and the king appeared.

Everyone, especially the tailor, gasped in surprise. His Majesty was dressed in the simplest, cheapest, most unkingly garments imaginable. He had the choice of the world's finest materials, but he had chosen to wear the clothes of a begger.

'I am going into the valley,' he said quietly." (by Michael Daves)

And He did go into the valley... our valley. Imagine the shock in Heaven when the plan became clear: Emmanual - God is to be with us. It is The Miracle of Christmas... Jesus left perfection to be one of us.

How can we grasp the enormity of this wonderful Truth? What captures the depth of the sacrifice made for our benefit? Let me ask you this... would you:
Those examples don't begin to capture the sacrifice God Himself made on our behalf. What does it say about the God of the Universe, that He would stoop so low as to become a human being? Jesus, the God-Man, "... though he was in the form of God, did not count equality with God as thing to be grasped, but made himself nothing, taking the form of a servant, being born in the likeness of men. And being found in human form, He humbled Himself by becoming obedient to the point of death, even death on a cross." (Philippians 2:6-7)

And why did Jesus do this? He did it for the Glory of God... and to our eternal benefit.

I can't comprehend it all - what Jesus gave up, and why He did it. But I do know this: Your sin and mine created the problem... separated us from God. And the distance was so great, the problem so severe, the burden on us so impossible that only the initiative of the God of the Universe was enough to bridge the gap and offer us hope. And like the King in the parable above, He became like us - to our eternal benefit.

Amazing, isn't it? Yes, it is. If you don't know Him, seek Him - the One who gave up EVERYTHING for you. That's the real meaning of Christmas. May "the eyes of [all of] our hearts" be enlightened (Ephesians 1:18) to see Him as He is - and the incredible love He has shown towards His chosen ones - this Christmas Eve... and throughout the year.
Posted by Doulos Christou at 2:30 PM

Email ThisBlogThis!Share to TwitterShare to FacebookShare to Pinterest
Labels: Devotions

Amen.I always wonder why me? Grace..

It is THE question, isn't it? Thanks!