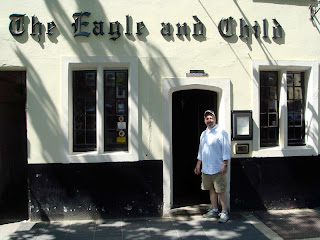 It's been a while since I posted, and with good reason... I've been on the road a ton this last month. In the UK for 10 days since the last post, end of the school year stuff with the family, Doulos jr. off to Kenya on a missions trip and Mrs. D getting ready for 2 weeks in Uganda with Compassion International.

For me, around the business trip earlier this month I had the chance to spend a day in Oxford with a dear friend (who was with me on his sabbatical) - we wandered the streets, looked at the history... how could we pass up a chance to visit the old "Inkling" haunt! I was having a pint in honor of the boys there when a group of people from "Harvard of the Midwest" walked through. It figures - more Wheaton people in the pub than locals! Here's a look at my wife's husband in what I understand was CSL's seat: 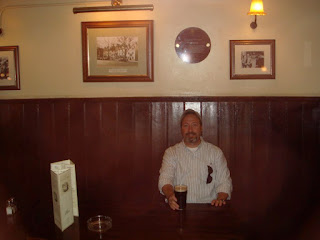 (I understand that the President's son was ushering through a tour of Wheaties and Moody students. Hope my choice in beverages didn't cause a stir in Midwest Evangelicaldom!)
Amidst the excitement of the trip, I found myself at the spot where Latimer and Ridley were executed in 1555 (and Cranmer in 1556), dying in denouncing the authority of the Pope and, in particular, the doctrine of transubstantiation. I realize that the times, the political landscape and contemporary culture played a big part in the drama of that 16th century scene, but I was struck by the fact that these men were willing to die for their beliefs. And they did... horribly, painfully. And all three of them - following the call of Latimer (and perhaps echoing the voice heard by Polycarp at his martyrdom) did "play the man" - and England still remembers their sacrifice.
Or maybe they do... the monument is there - along with the spot on the ground where it happened. But I was struck by how little it seemed to matter to those who passed by - an old story from a long ago time. 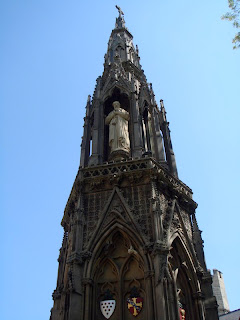 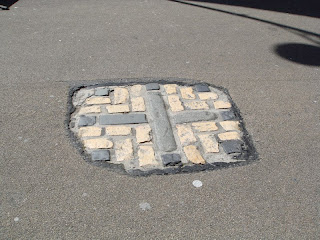 But for me, it was like it had just happened. Maybe it was having just read Light From Old Times by J.C. Ryle... but maybe it was also the reality that there was a day when something was actually worth dying for! I listen at baptism services when people talk about "giving everything" for the sake of following Jesus, but I was struck by the brutality - the finality - the commitment - the heroism - of the sacrifice made by these ordinary men who, in the end, gave an extraordinary testimony. Perhaps Cranmer caught my attention the most... he denied his faith and, in the end, came through with a firm affirmation of the truth. And as the fire was kindled, he stuck out his right hand - the one that had signed the damning recantation of his protestant faith - and put it right into the fire... he held it there while it burned, saying "that unworthy hand!" Wow.

In today's post-modern, relativistic evangelical sub-culture, it feels sometimes like everything is open for debate - 4 views of this, 5 views of that... with "group consensus" as the only thing which holds many congregations together. Doctrine (which, by its nature, divides) is the enemy of consensus and viewed with distain! That's a subject I'd love to discuss more, but how different our time is than the days of Latimer, Ridley and Cranmer! (BTW, for an excellent analysis of this current evangelical cultural phenomenon, I'd highly recommend that you read Chapter 4 of the book Beyond the Bounds ["Why Open Theism Is Flourishing Now" by William C. Davis - along with his devastating anaylsis of key proponents of open theism, his cultural analysis is spot-on and important for all to understand]).

Anyway, the question I'm asking is this: What would I die for? I hope I'm not tested on this soon, but I'd like to think that the rest of my life will increasingly mirror the devotion of these men at the point of their obedience even to death. In a world where truth is denied... it certainly isn't worth suffering for... I want my life to be measured by the unshakable reality of the truth of the doctrine of God revealed in our Lord Jesus Christ. And even if I need to point out that my members are "unworthy" like Cranmer, may I ultimately be found faithful in the end. 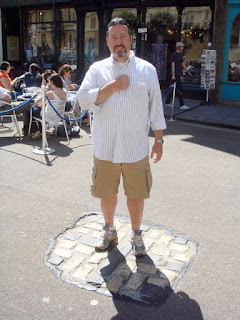 What a legacy... what a testimony. What a challenge. What a need today.

Well, I'm back in London again this week, and will head up to Cambridge for the day on Friday. Anybody have any good reformation sites for me to visit?? :)

Posted by Doulos Christou at 6:13 PM

Take care brother. I will pray for you mission work.....