The American Church In Captivity: Naming The Issue

Thanks to those of you who joined us this week - great discussion!

We continued our discussion of the book Christless Christianity: The Alternative Gospel of the American Church today, focusing on chapter 2. (All quotations below are from the book.) As mentioned last week, we are exploring the extent to which - as a theological, philosophical and practical matter - American culture influences not only what we do, but why we do it. Is it possible that "American" thinking is shaping what we do - and even what we believe?

While we haven't arrived there yet in totality, both Dr. Horton and I agree that we are well underway.

For those who weren't there, here are the class notes:

I. A Brief, Unscientific Survey
We started class by looking at the following video, and discussing the sermon series described...


Note the focus of each series - both in terms of the problem or issue(s) to be addressed and the assumptions about the audience. (By the way, I've added a few other examples that didn't make the video cut below*.)

The point is that the presentations focus on us and our needs. So... is that wrong? There's nothing bad about offering help in these areas, but I'm asked a different question, which is this: Is this The Gospel?

It sure is appealing to Americans, though. Witness the growth in churches who use these strategies to appeal to both the "unchurched" and to those who "don't like church." Why is this so popular?

To get a handle on that, consider the mind-set of America on religious issues. George Barna, in his book The Second Coming of the Church, said the following about the average American's religious view:

"To increasing numbers of Americans, God - if we even believe in a supernatural deity - exists for the pleasure of humankind. He resides in the heavenly realm solely for our utility and benefit... this same group of people, including many professing Christians, also believe that people are inherently good; that our primary purpose is to enjoy life as much as possible."

If this is the case (and who really knows whether these kinds of studies are accurate or not), its no wonder that the presentations above can appeal to the average American. This is, however, further aggravated by the level of Biblical illiteracy that exists (sadly, even in the church). Michael Horton points out that:

"Eighty-two percent of Americans (and a majority of evangelicals) [polled] believe that Benjamin Franklin's aphorisms, 'God helps those who help themselves,' is a biblical quotation. A majority believe that 'all people pray to the same god or spirit, not matter what name they use for that spiritual being' and that 'if a person is generally good or does enough good things for others during their life, they will earn a place in heaven.'"

Adding insult to injury and after citing a series of reports, Barna concludes,

"In short, the spirituality of America is Christian in name only... We prefer choices to absolutes. We embrace preferences rather than truths. We seek comfort rather than growth..."

Finally, Horton states that "[a]mong the false assumptions 'killing the ministry' today are that 'Americans have a firm understanding of the basic tenets of Christianity,'... or that non-Christians are interested in salvation, since most Americans 'are relying instead on their own good deeds, their good character, or the generosity of God' apart from Christ."

These are stinging indictments. If true, they deserve our attention - and even more so if they are part of our own mindset.

II. Defining the Condition: “Moralistic, Therapeutic Deism”
Horton points out that "Americans have always been can-do people. Pulling ourselves up by our own bootstraps, we assume that we are good people who could do better if we just had the right methods and instructions. Add to this the triumph of the therapeutic in popular culture and we end up with what sociologist Christian Smith has called 'Moralistic, Therapeutic Deism." (I've included a link to a paper presented at Princeton Theological Seminary on these findings at the 2005 Leadership In Youth Ministry Lecture Series below.)

Citing a study conducted from 2001 to 2005 through the University of North Carolina, Smith conducted extensive research and interviews to understand teen spirituality in America today, and concluded that "moralistic, therapeutic deism" is "the dominant form of religion or spirituality" among American teens. (I'll also note that Smith bemoaned the fact that "most teens - even those reared in evangelical churches who said their faith is 'very important' and makes a big difference in their lives - are 'stunningly inarticulate' concerning the actual content of their faith.'"

What they do appear to believe is this:

1. God created the world.
2. God wants people to be good, nice, and fair to each other, as taught in the Bible and most world religions.
3. The central goal of life is to be happy and to feel good about oneself.
4. God does not need to be particularly involved in one's life except when needed to solve a problem.
5. Good people go to heaven when they die.

In short, these beliefs are summarized as
We're using this as a working definition for now. But that leads to another question: What is it in America (and even in the human heart) that makes this plausible (and popular)?

III. A Theological Footprint
To understand this, I asked the foundational question: What is Man's condition? After the fall, what happened to man? 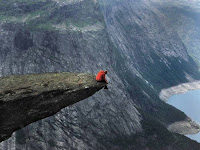 We touched briefly on the 3 historical views of the nature of man:

1. Man fell up! He's getting better and better. Said another way, there is nothing in man which prevents him from being good or bad... he has only to decide to improve himself and he can do so. As a result, he needs information and/or motivation. This is Pelagianism - it is the "default" setting of the human heart, the prevailing view of American culture and, increasingly, rearing its ugly head in the Church today.

2. Man fell down, he's in a very precarious spot and is in deep trouble. He needs help to improve his situation... maybe a little, or maybe a lot, but this view says that man retains the ability to cooperate in that rescue. Ultimately, he has to decide to take the help. It is a "synergistic" (cooperation is required between God and man, with the focus on man's response to God's initiative.) This is Semi-Pelagianism - while this hasn't been true historically, it is the "default" setting of the Evangelical movement today.

3. Man fell down to the ground, and he died. He is dead to God - he doesn't need information or motivation, or "help" - he needs life. This is the Reformed/Augustinian view... I would point out that it is the Pauline view, the view of Jesus - in short, the Biblical view.

This doctrine of man's "total inability" is shocking to American thinking. It is deeply offensive to be told that you can't do anything. But it's offense doesn't make it any less true.

Without regard to the differences between the Biblical view and the Semi-Pelagian view (and there are many, they are significant, and we'll deal with them later), the point this week is to begin to examine how the Pelagian view - which we will argue is the default view of American thinking (if not the default view of the human heart) - impacts the thinking and operation of the church.

The denial of "original sin" isn't being left to those outside the Evangelical movement today... witness the broadside on the doctrine from the blog postings of Tony Jones from Solomon's Porch in Minneapolis... consider “Original Sin: A Depraved Idea” where this conclusion is presented: “I have come to reject the notion of Original Sin. I consider it neither biblically, philosophically, nor scientifically tenable…” (This is Monday's post - you can follow the trail to keep up with the conversation. Does anybody want to ask Tony about this the next time he comes to Wheaton?)

IV. Where is The "Scandal of the Cross" in America?
As noted in the sermon series highlighted above, is it possible that much of what is proclaimed in "Christian" churches today is not "scandalous" because it conforms to the culture's underlying Pelagian assumptions?

So, what is “the Scandal of the Cross” in our culture? I'll suggest this: It is scandalous to say that man is TOTALLY LOST and UNABLE to help himself in ANY WAY. His problem is not primarily HIS experience or life circumstance, but that he has offended His creator. And that without merit or participation, the God of the Universe demonstrates both the justice of His wrath and the extent of His love and grace by saving people through the substitution of Himself in the person of His Son Jesus. It is precisely this unilateral action that is so offensive to Americans. We want to believe that we are inherently good and self-reliant. The Gospel message at its heart is exactly the opposite. And when the Gospel is preached in its fullness, it is deeply offensive to the American mindset at precisely these points.

Christless Christianity avoids the scandal by denying these points. The observation about liberal theology in the 1950s by H. Richard Niebuhr seems sadly appropriate to even some Evangelical messages today:

“A god without wrath brought men without sin into a kingdom without judgment through a Christ without a cross.”

And just to repeat myself again, in the words of William Willimon,

“Lacking confidence in the power of our story to effect that of which it speaks, to evoke a new people out of nothing, our communication loses its nerve. Nothing is said that could not be heard elsewhere… In conservative contexts, gospel speech is traded for dogmatic assertions and moralism, for self-help psychologies and narcotic mantras. In more liberal speech, talk tiptoes around the outrage of Christian discourse and ends up as an innocuous, though urbane, affirmation of the ruling order. Unable to preach Christ and him crucified, we preach humanity and it improved.”

If we are to recover the scandal of the Cross in our culture – the Gospel itself – we will have to face head on the diametrically opposing viewpoints of Biblical Christianity and American culture on these 3 questions:

Next Week: The Message of Christless Christianity, Part 1: What Is Man's Problem?

"The Pelagian Captivity of the Church" by Dr. C. Matthew McMahon

"An Interview with David Wells" (Do yourself a favor, too - If you haven't read David Wells, be sure to read his book The Courage to be Protestant (or any of the 4 preceding books in the series - they're listed in the right-hand column of the blog).

*Here are just a few other sermon series promotion videos to consider. My biggest problem with this exercise was deciding which of the many to highlight!)

One of the many "Pure Sex" sermon series... (is it just me, or is it tacky to use www.iamturnedon.com as the website for a church?)

Bringing Sexy Back Promo from Revolution Church on Vimeo.

"Confessions of a Pastor"

We Bare All from Ian Schneider on Vimeo.