We've learned that our primary concern With Christ in the School of Prayer is to be for our Father - His name, His glory, His honor, His will and His purpose. How different this is from the prayers we hear so frequently, which focus on our needs and concerns!

We've also learned that God is concerned about us as well - He is our Father. We understand a father's love and concern from their children, and the more we realize that God is the Father of those whom He has chosen, the greater our confidence to come into His presence - to take up His concerns, and to bring our concerns to Him as well. And how much He loves and cares for us! How He meets every one of our needs - He knows them before we even ask, and He has resource sufficient for all!

We learn in this portion of the lesson that our needs include not only physical provision, but relational provision as well. We were made to be in community - remember, after all, that God's one "negative" comment PRIOR to the fall was this: "It is not good that the man should be alone..." (Genesis 2:18). We were made for communion with God Himself, and to be in right relationship with those around us. And the barrier to that communion is, of course, our own sinfulness.

How appropriate, then, that we are given a way to address this great need in the Model Prayer - the first provision which requires us to do anything! (By the way, it's the subject for another day's post, but think about Jesus' parable tying our forgiveness with that which we extend to others in Matthew 18: Assume that a day's wages were $10 - the King forgave a debt of $780,000,000 (!) while the servant would not forgive a debt of $1,000! Aren't the things we're asked to forgive our brothers also disproportionately small compared to what we've been forgiven?)

So today's questions: In light of who God is and His provision for you, will you own your fault - your sin - which is the cause of your estrangement from Him? And in receiving His pardon - and considering its generosity, will you forgive those around you? 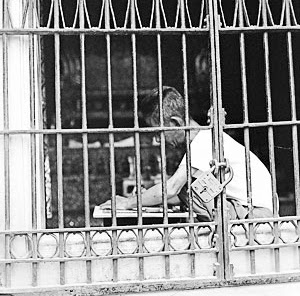 "‘And forgive us our debts, as we also have forgiven our debtors.’ As bread is the first need of the body, so forgiveness for the soul. And the provision for the one is as sure as for the other.

We are children but sinners too; our right of access to the Father’s presence we owe to the precious blood and the forgiveness it has won for us.

Let us beware of the prayer for forgiveness becoming a formality: only what is really confessed is really forgiven.

Let us in faith accept the forgiveness as promised: as a spiritual reality, an actual transaction between God and us, it is the entrance into all the Father’s love and all the privileges of children.

Such forgiveness, as a living experience, is impossible without a forgiving spirit to others: as forgiven expresses the heavenward, so forgiving the earthward, relation of God’s child. In each prayer to the Father I must be able to say that I know of no one whom I do not heartily love."

Posted by Doulos Christou at 4:57 PM

Email ThisBlogThis!Share to TwitterShare to FacebookShare to Pinterest
Labels: Devotions

I have a question about this one.

Murray says, "Only what is really confessed is really forgiven."

I'm not sure what he really means by this. I wish I could sit with him and ask him. But it seems to create a problem for me.

Can we possibly think that we have "really" confessed every single one of the sins for which we are guilty? I submit that is impossible. I live in a condition of sin every second that I don't love God with every fiber of my being and my neighbor as myself. At the end of every day I confess to God that I haven't loved him as I ought. Nor have I loved my neighbor as myself. But isn't that the very "formal" confession Murray is concerned about?

What about sins that I haven't confessed and I have forgotten about? Every night I make this confession, "I have sinned in what I have done and what I have left undone and I do not know or remember them all." I don't think Murray would like that either.

Do you think Jesus is talking about confession of sin here?

Do you see a difference between confession and asking for forgiveness?

Jesus paid for all our sins, past, present, future. We know atonement is complete. Does that mean we are forgiven? Do we still have to confess our sins?

John seems to make it clear that we are to confess our sins because God is faithful and just and will forgive our sins and cleanse us from unrighteousness.

I wonder if this particular prayer request might mean something like, "Help us forgive our debtors as you have forgiven us." Or does it relate to the warning we have that if we do not forgive those who sin against us our Father will not forgive us?

Sorry this is so long. You know I pray this prayer several times a day and I almost always wonder about this one clause and have thought alot about it. I'd love to hear what you think.

And yes, I have hundreds of pictures of this last India trip. More than you want to see. But I can and will gladly show you as many of them as you can stand. I have them on disc and can show them to you on my laptop. Name the place and time!

I agree with your questions (and I just KNEW that I should have processed this a little more in the post, too!) I think Murray is referring here to the need for reality in confession as opposed to the perfunctory, glib prayer for "fire-insurance" forgiveness - pointing perhaps at the reality of the spiritual condition of our hearts in the first place.

Maybe he's speaking to those who, like the Pharisees coming to John the Baptist, needed to "bring forth fruits consistent with repentance" - not to earn the forgiveness, but to demonstrate the reality of God's work within them.

I believe that the work of the Atonement paid for ALL of the sins of the elect, and that we stand in right relationship before God solely on the basis of His completed work, and not because of anything we do... especially in earning forgiveness. So, in putting that together with 1 John 1:9, I'd say that our confession is evidence of the work being done in us as well as a reminder of our responsibility to forgive our brothers as well.

Thank God that He works in us and through us to accomplish His will and purpose, though - it certainly isn't in me... and I'm amazed when I see "me" changing. How amazing is our God for doing this!

Oh, and by the way, who was that wise pastor who challenged me to read 1st John every day for a month and focus on the evidences of conversion? I'm not quite certain (due to my advancing age), but I'll never forget that I let him down in not learning the proper music to the 1 John 4:7-8 song! :)